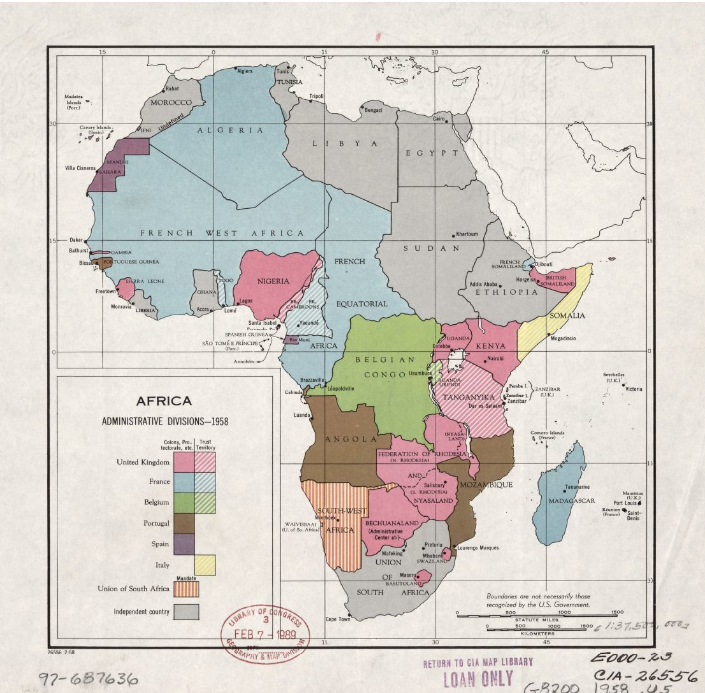 Mpumelelo Tshabalala discusses a symposium that marked the 60th anniversary of the All Africa People’s Conference which was hosted at the University of London last month. The symposium created the space for reflection on the historical significance of the 1958 AAPC and on how it can be used to understand and shape where Africa is today. Tshabalala also raises some important questions about race and politics at the event.

On Thursday, 6 December 2018 the All Africa People’s Conference’s (AAPC) 60-year commemorative event took place in one of Senate House Library’s grand, parliamentary styled rooms.  The symposium was incredibly rich, evident in the effort made to set and comprehend the context of the original conference in 1958. Further to the presented content, accompanying the programme was a list of the AAPC’s delegates, fraternal delegates and observers, a 1958 map of the continent and information on the complimentary commemorative conference taking place in present day Ghana at the same time.  The organisers had prioritized the inclusion of personal, narrative accounts of those present at the AAPC, so the list of speakers included three witnesses of the original event. Perhaps, most successfully, the symposium created the space for reflection on the historical significance of the 1958 AAPC and on how it can be used to understand and shape where Africa is today.

In a lot of ways this symposium felt historic – one such way was the opportunity to engage with living history. We were addressed by those with first-hand accounts of the AAPC.  Zambia’s first President, Kenneth Kaunda recorded, two days prior, and shared a video link address in which his grey eyes looked tired but patient, and his frail hand waved a white handkerchief after each poignant sentiment.

Bereket Habte Selassie, present in 1958, described the experience of watching Kwame Nkrumah speak. He had since gone on to serve as Attorney General under Haile Selassie and took us through his decision to resign from the regime for reason of its imperialist policies.  His nostalgic tone illustrated just how much the AAPC shaped his identity and contributed to his strong adherence to the principles of Pan-Africanism.

The celebrated Ghanaian writer, Cameron Duodu – who reported on the conference in 1958 – spoke with poetic cadence. He unpacked the ‘P’ in AAPC explaining that it was in fact a people’s conference and not a state conference as contrasted to the Conference of Independent African States held in Ghana earlier that year. He reminded us of the centrality of solidarity and unity as themes at the AAPC and the fact that these ideas rapidly led to the creation of the OAU. He brought into sharp focus the importance for Africans to overcome what another speaker had referred to as the continent’s global ‘humiliation’.  Africans still need to be afforded the respect they deserve, the ‘right to manage and mismanage all their affairs.’  I was compelled to ululate after his address.

During the course of the morning, Dan Branch, Marika Sherwood and Leo Zeilig discussed the histories and influence of Tom Mboya (of Kenya’s trade union leadership), George Padmore (a Trinidadian activist) and Franz Fanon (the Martinique-born revolutionary) – individuals that had all participated in the AAPC.

The third session ‘Africa and the wider world’ was electric. Joseph Godson Amamoo delivered his views on ‘the African personality on the world stage’ – and it was the most interesting display of cognitive dissonance.  It is jarring to watch an elder, black, African man incite tropes about Africans’ inability to rule – insinuating that Africa required the intervention of Western sponsored multinationals and the imposition of neo-liberal principles. During the question and answer session, two Black floor members rebutted his contribution. They spoke of the World Bank and IMF’s structural adjustment programmes, the de-industrialisation policies of colonialists, and France’s continued control of multiple francophone African countries’ economies. What was hard to see was Amamoo’s inability to concede the point – he maintained that Africa was not able to successfully self-govern.

Koffi de Lome was the youngest of the speakers on the panel and he articulated an interesting youth perspective under the heading ‘the resonance of the AAPC for Africa today – African lives matter’, leading me to question him on two issues from the floor.

I commented on what I regarded as the judgmental tone regarding where he feels the continent should be.  He certainly painted the picture that the previous generation had not done enough to fulfill the hopes of the AAPC. I challenged him to contextualize this disappointment. I appealed to generosity in our judgment of previous generations. To reinforce this point, African ‘ethnic’ and ‘tribal violence’ is a mirror to the West’s fascism and xenophobia.  Africa’s ‘corruption’, ‘neo-paternalism’ and ‘clientelism’ is matched by the West’s lack of transparency regarding political party funding. African leaders are, like most, susceptible to the corruption of power. Monolithic narratives describing the continent as a violent, corrupt, chaotic place are enacted to perpetuate racist double standards about which countries are viewed as ‘adults’ and which countries are treated as ‘infants’ within the global family.

My second point was to problematize Koffi’s belief that the discussion of race should not form a focus of Pan-Africanism. Demolishing divisions has to begin with a process of naming such divides. Having the language to discuss the way in which we allow our societies to be shaped by these entrenched divisions is essential if we are to deconstruct them. Thinking that we are a post-race generation is to completely underestimate the scope of race-based colonial domination. It should not soon be forgotten that it was colonialism that introduced meaning to skin color, and then used it to justify the forced kidnapping, murder and unethical medical experimentation on black bodies and the expropriation of their land. These actions structurally deformed our societies.  Merely obliterating the use of racialized terms will not address the fact that these abuses have multiplied over the years and created structural inequality that is racialized within, among and between countries.

Overall, the list of symposium speakers was overwhelmingly male. The two female speakers were both white. While the participants were predominantly comprised of older white men.  Sherwood was the only panelist I heard refer to a black woman’s contributions to Pan-Africanism – Amy Ashwood Garvey. As the day progressed the panels (and attendees) got progressively darker and younger in their composition and the focus of discussion shifted to how we ought to understand our past, Pan-Africanism and the influence that the AAPC has had on both.

I valued  Zeilig’s presentation of an ‘unplugged’ Fanon.  His talk ‘Franz Fanon: The Debate Over Violence versus Non-Violence’ cited some of Fanon’s speeches which called for individuals to take up arms.  Zeilig’s presentation was also symbolically important.  Watching a white man endorsing Black people’s agency to be violent runs contrary to my experiences at similar symposiums. More commonly white speakers discussing Black lives seldom choose to focus on white people’s responsibility to eradicate the racist structures from which they benefit. Zeilig was directed in a question by a white, female participant about the role non-violence should play in Black lives. I then asked him, almost in answer, about the role that white allies should play in encouraging their counterparts to stop paternalistically disrespecting Black people’s agency to engage in violence.

As a South African, I found Salem Mezhoud’s presentation on ‘Arabness’ and its relationship to ‘Africanness’ enlightening.  During his session, he attempted to unpack Morocco’s precarious relationship with the notion of Africanness by looking at its associations with the OAU, EU, AU and ECOWAS.  It was a provocative contrast of identity creation and race-making in North Africa and sub-Saharan Africa and exposed the ramifications of these processes.

The question that continues to linger for me is whether Pan-Africanism is inherently an idea that originated in the diaspora and among elites with international experience and exposure?  Most speakers at the symposium appeared to assume that Pan-Africanism had not been previously conceived of or aspired to prior to WEB Du Bois’ coining of the term.  I tend to think otherwise. I wonder to what extent this assumption is informed by the tendency to focus on recorded Western history.

Mpumelelo ‘Mpumi’ Tshabalala – is currently pursuing her MSc at the School of Oriental and African Studies in African Politics.  She is an attorney by profession and the founder of Mpumelelo Yesizwe Legal Consulting a South African consultancy advising on how areas of law can be used to transform African societies.

Featured Photograph: the map of the African continent from 1958 distributed to participants of the symposium in December.