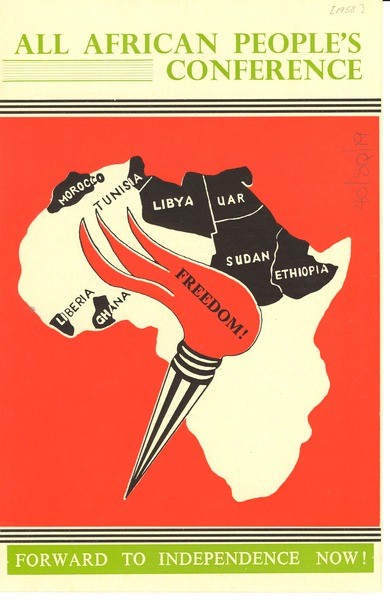 December 2018 marks the 60th anniversary of the All African People’s Conference (AAPC), which was held in Accra, Ghana, between 5 and 13 December 1958. Under the slogan ‘Hands off Africa!!’, the AAPC was a watershed moment in the history of Africa’s liberation from colonial rule and white supremacy. To mark its significance, a major one day conference was held on 6 December 2018 at the University of London by the Institute of Commonwealth Studies (ICWS), School of Advanced Study, and Westminster United Nations Association, under the title of ‘Hands Off Africa!!’ The 1958 All African People’s Conference: Its Impact Then and Now’.

The AAPC was inspired by Dr Kwame Nkrumah, Prime Minister of newly-independent Ghana, and George Padmore, Nkrumah’s Adviser on African Affairs, to advance the ideology of Pan Africanism. Its main themes were non-alignment, anti-colonialism, anti-imperialism, and African unity. More than 300 political and trade union leaders responded to the call, representing some 65 organisations from 28 African territories. A schedule of the principal organisations is here.

The AAPC chairman was Tom Mboya, a prominent Kenyan trade unionist. Mboya drew a contrast between the conference in Ghana and a conference seventy-four years earlier, when the European powers had partitioned Africa – the Berlin conference of 1884. That meeting, he said, was known as the ‘scramble for Africa’. But, as of 1958, he said firmly, those same powers ‘will now decide to scram from Africa.’

The organizers of the conference stressed the importance of pacifism in achieving independence, but this was challenged: Fanon argued that Algeria could not achieve freedom from France without armed resistance.  An impassioned ‘violence versus non-violence’ debate reverberated through the AAPC and through the subsequent years of the struggle for liberation.

Celebrating the anniversary in December 2018

Philip Murphy, the director of ICWS, opened the 2018 anniversary conference in London in a packed room. He expressed his pleasure that the Institute of African Studies at the University of Ghana was also marking the 60th anniversary by holding a major three day conference in Accra – the venue of the AAPC. This event, which was taking place in the same week as the London conference, was shining a spotlight on many important issues relating to youth, women and the future, under the title of ‘Revisiting the 1958 All-African People’s Conference – The Unfinished Business of Liberation and Transformation’. The organizers of the two events – in London and in Accra – now hoped to build on their shared interests and to explore the possibility of future collaborations.

Murphy then introduced the former Commonwealth Secretary-General Chief Emeka Anyaoku, who delivered the keynote speech of the conference: ‘Pan-Africanism and Relations Today between Africa and the Commonwealth’. The speech eloquently explored the impact and significance of the AAPC and its role within the framework of the Pan African movement.

Those attending the London event were given a unique opportunity to hear about the 1958 conference from three people who were actually there: Bereket Habte Selassie, Cameron Duodu, and the First President of Zambia, Dr Kenneth Kaunda.

Bereket Habte Selassie was a delegate from Ethiopia, which was one of only eight independent nations at that time on the African continent. ‘To young Africans like myself at the time,’ he said, ‘it was a moment at once defining and awe-inspiring.’  Selassie went on to become a leading scholar of African and Afro-American Studies at the University of North Carolina, as well as an activist for political reform in Eritrea and the principal author of Eritrea’s constitution. In 2011 he gave a lecture in the Distinguished Mwalimu Nyerere Lecture Series on ‘Reimagining Pan-Africanism.’

Cameron Duodu was then a young radio journalist, who reported on the conference for the Ghana Broadcasting Corporation. His nation, Ghana, had become independent from Britain as recently as 1957, the year before the AAPC. These were ‘heady days’, said Duodu, ‘The atmosphere in our part of Africa was quite intoxicating.’ Following the AAPC, he took on senior editorial roles in Ghanaian newspapers, magazines and broadcasting, and now writes as a freelance journalist for British and international newspapers and magazines.

Kenneth Kaunda, First President of Zambia, had recorded a special message for the 2018 conference in London. Speaking about the importance of the AAPC in Accra, Dr Kaunda – holding a cherished photograph of Kwame Nkrumah – said that at last ‘we could see Africa as one. We left Accra very inspired and refreshed’. The recording had been produced by Gabriel C. Banda, Dr Kaunda’s personal assistant in Zambia; John Jones, of Networkers SouthNorth in Norway, facilitated the recording and introduced it, as one of the conference chairs.

There was yet another compelling personal connection between the AAPC and the London conference. Paul Boateng, who chaired the Round Table at the end of the day, told the audience that his father, Kwaku Boateng, had not only attended the AAPC but had also been involved in its organisation.  Boateng recalled the unforgettable impact of the AAPC on his own life as a child, aged seven, living in Accra. He also vividly remembered drinking Coca-Cola with George Padmore.

Themes emerging from the conference

A range of issues were explored. Marika Sherwood of ICWS outlined the importance of George Padmore, utilising his worldwide contacts built up over many years, who ensured that intellectuals of the day and African leaders of the future were invited in 1958. The role of Tom Mboya in the AAPC was examined by Dan Branch, who teaches African History at the University of Warwick, who went on to explore Mboya’s backing by America’s CIA. This theme was taken up by Susan Williams, a Senior Fellow at ICWS, who gave a paper on the infiltration of the AAPC by foreign intelligence organizations.

David Wardrop noted that UN Secretary-General Dag Hammarskjöld, in recognising the strength of the decolonisation movement in Africa, set up the UN Economic Commission for Africa in 1958, along with similar initiatives on other continents. Hammarskjöld was to lose his life in the search for peace in the Congo in 1961. Knox Chitiyo, a Fellow at the Africa Programme of the Royal Institute of International Affairs (Chatham House), gave an analysis of African defence and security, from the Organisation of African Unity to the African Union; this analysis offered a fresh perspective within a Pan African context.

Joseph Godson Amamoo spoke about the ‘African personality’, which Nkrumah had asked Ghanaians to project on the world scene, to challenge racism against people from the African continent. Amamoo said that he had taken this instruction very seriously as Ghana’s first public relations adviser to the Ghana High Commission in London, and then as Ghana’s first ambassador to Hungary and the International Atomic Energy Agency in Vienna.

There was animated discussion about the impact of the participation of Franz Fanon, who represented Algeria at the 1958 conference. This discussion was generated by the presentations by Leo Zeilig, whose books include a study of Frantz Fanon and who is an editor of the Review of African Political Economy, and by Salem Mezhoud, from the African Leadership Centre at King’s College London. They explored Fanon’s role as an advocate for the resort to violence as a necessary element in the fight for African independence and for perceptions of African unity.

Dialogue between the generations

The conference room was charged with energy throughout the day, as the different generations engaged in vigorous dialogue about many of the issues that were raised, including the role of women and the way forward for African countries.

The closing session of the conference was the Round Table, which was chaired by Boateng; the panel included Cameron Duodu, Bereket Selassie, Joseph Amamoo, and Hakim Adi, whose book Pan-Africanism: A History, had been published a few months before. The panellists offered thoughtful reflections on the ways in which the 1958 conference had contributed to the path taken by African countries over the subsequent sixty years.

Then Boateng invited contributions from the floor. When many hands immediately shot up, he said that everybody would be heard. A concern expressed by some of the students was that, very often in the UK, white people dominated events such as the conference that was taking place. This led to a lively debate. The panellists argued that there should be no colour bar – only a determination to bring about justice and to make the world a better place. Amamoo, whose most recent book is Racism: A Global Problem, recalled that Nkrumah had opposed racism and that the AAPC had been non-racial in its attendance.

There was keen interest when Bishop Trevor Mwamba, formerly Bishop of Botswana, and now Assistant Bishop, Diocese of Chelmsford and Vicar of Barking, identified the spirit behind the AAPC as the African philosophy of ‘Ubuntu’ – that a person is a person through other people. This meant, he said, that nations which were independent were morally compelled to help to liberate countries from colonial rule. The Bishop reminded the audience of Kwame Nkrumah’s independence speech in 1957:  ‘Our independence is meaningless unless it is linked up with the total liberation of Africa.’

Koffi de Lome, the founder of the new organisation AfricanLivesMatter, shared his concern that today’s young Africans know too little about the struggles of those who had fought for the independence of their own country. He worried, he said, about the lack of continuity between the different generations and he welcomed the opportunity for them to come together at the London conference. He expressed with feeling his appreciation for the participation and the words of those who had attended the AAPC; he believed that everyone that day had learnt a great deal from them. His final words were: ‘No nation, no civilization has come to the fore without new organization, without thinking new thoughts, the struggle for the hearts and minds of our people must be fought for complete and total liberation of Africa! HandsOffAfrica! AfricaMustBeFree!’

A film of the conference will shortly be accessible through the website of the School of Advanced Study at the University of London.

The organisers are extremely grateful for the generous sponsorship of United Nations Association London Region Trust and the Review of African Political Economy, without which this conference would not have been possible. Featured Photograph: All African People’s Conference leaflet, 1958. W. E. B. Du Bois Papers. Special Collections and University Archives, University of Massachusetts Amherst Libraries.