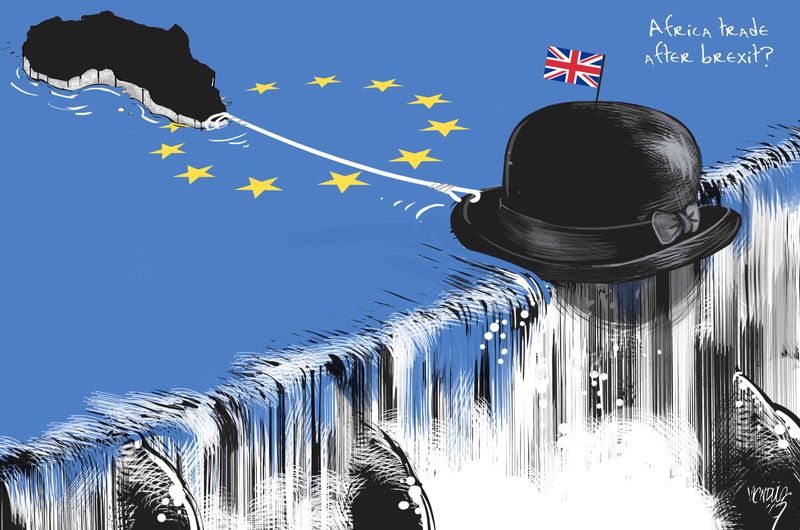 Examining the likely outcome of Brexit for Africa, Dirk Kohnert exposes the myths of a rosy new dawn for the continent’s relationship with the UK. Behind the ‘altruistic’ Post-Brexit rhetoric of the British government about assisting pro-poor growth in Africa, the fact is that the UK is a major champion of a wide network of notorious tax havens in UK’s overseas territories, crown dependencies, and island economies of its former empire. The prospects do not look good.

The controversial discussion on the potential impact of the Brexit, that is, the impending withdrawal of the United Kingdom from the European Union on Africa by the end of March 2019, has been characterized by high-flying illusions on the part of the proponents and grim predictions on the part of the sceptics. The British government’s vision of a ‘Global Britain’ relies heavily on its reinforced cooperation with Commonwealth nations, to which 19 out of 54 African states belong, including the most populous and powerful states, Nigeria, South Africa, as well as Kenya, Egypt and Ghana. However, up to now, commerce with Commonwealth nations represents just 9 per cent of UK foreign trade. Whether London would be able to increase this share substantially by liberalizing the markets in reducing tariffs and non-tariff barriers to trade, remains highly questionable. It remains unclear what the UK could offer, which competing global players with increasing interest in African resources and markets, such as China, India, the US and the EU, do not already have on their agenda.

What exactly are the issues at stake for Africa? In this blogpost I focus on five issues that could arguably have the greatest impact on sustainable cooperation between both the UK and Africa and the EU and Africa: market access, foreign direct investment (FDI), aid, security, and partnership.

For most African Commonwealth countries, Britain has been by far the biggest market for their exports. London currently claims that it will protect nascent African industries with its post-Brexit trade policy, which is supposed to stand in stark contrast to the EU’s Economic Partnership Agreements (EPAs). However, in the case of a hard or ‘no-deal’ Brexit, African countries will no longer have preferential access to the UK if London does not succeed in negotiating new bilateral agreements with African governments in advance. In view of the limited time left before March 2019, this appears unlikely. The exclusion from preferential access to the UK holds not just for signatories of the EPAs, but also for participants in the EU free trade agreements and the EU general system of preferences, including the duty-free quota-free market access under the Everything-But-Arms  initiative. Major adverse consequences are predicted for countries such as South Africa, Nigeria, Egypt, Kenya, and Mauritius, as the UK accounts for approximately 25 to 30 per cent of their exports to the EU. London will have to get its priorities right in concentrating its negotiations first on the biggest Commonwealth players like Canada, Australia and South Africa. For the rest, Britain will probably be more selective, trying to focus on bilateral deals, preferentially with those African countries that are most important to its own economy.

On the occasion of the G20 summit in Hamburg in July 2017, British prime minister Theresa May announced sweeping post-Brexit programs to reduce African countries’ reliance on aid. London envisaged increasing Africa’s long-term prosperity by combined trade-enhancing programs such as ‘aid for trade’, financial instruments, and the promotion of FDI in Africa. The amount of UK investment in Africa, which more than doubled between 2005 and 2014 from GBP 20.8 billion to GBP 42.5 billion, was meant to be further enhanced by Brexit. Industry, mining, and financial services have been the main industrial sectors receiving British FDI, accounting for 54.4 per cent and 34.3 per cent of total UK FDI into Africa in 2014, respectively.  Last, but not least, UK investment in Africa, just as the distribution of Britain’s mineral wealth on the continent, is restricted to a very small elite in the UK and Africa. British companies control large areas of African land enclosing key mineral reserves including gold, copper, platinum, coal, and diamonds. About 100 companies listed on the London Stock Exchange – most of them British – have mining operations in 37 sub-Saharan African countries. They collectively control over US $1 trillion worth of Africa’s most valuable resources. British companies could be inclined to negotiate in the future independently of perceived or real EU ethical restrictions which would allow these inequalities to aggravate even more. The ever-increasing use of tax havens by wealthy British citizens might be taken as an indicator of such unrestricted ethics. Apparently, behind the ‘altruistic’ Post-Brexit rhetoric of the British government about assisting pro-poor growth in Africa, the fact is that the UK still supports a wide network of notorious tax havens in UK’s overseas territories, crown dependencies, and island economies of its former empire.

As a complement to increased FDI, Prime Minister Theresa May also announced at the G20 summit in Hamburg that the British government will seek to boost the integration of African countries into global financial markets post-Brexit. Among other things, she promised to contribute GBP 60 million for the construction of a strong and transparent African financial market. According to Theresa May’s rather elusive announcement, the UK will seek to stimulate financial innovations, to enhance the autonomy of the African banking sector, and to allocate financial resources where they are most needed.

Although Prime Minister Theresa May reaffirmed on several occasions in 2017 and 2018 the British government’s commitment to spend 0.7 per cent of gross national income on aid (enshrined in law in 2015), it is likely that Brexit could result in a decrease in UK aid for Africa, for the following reasons. The divorce from the EU will deprive the UK of substantial multiplier effects in relation to aid. The British government apparently saw the EU as a catalyst for enhancing its own aid. In 2013, the Senior European Experts Group, an informal group of former high-ranking British diplomats and civil servants who regularly publish high quality briefing and opinion papers about EU issues, stated ‘that statistics about the strength of the UK economy, such as it being the seventh largest economy, “flattered to deceive”, and that by working through the EU the UK was able to maintain influence and prosperity “in an era where the relative balance of global growth, population and power is moving away from the UK and Europe”’. Deprived of this, Britain’s willingness to fulfil its aid pledges could decrease significantly.

Under these conditions, London would probably focus on hand-selected strategic partners and existing bilateral ties, particularly with individual African Commonwealth states such as South Africa, Nigeria, Kenya at the expense of the poorest African countries. In addition, it could broaden its range of bilateral partners at the expense of multilateral development cooperation of the UN, IMF, World Bank etc.

The British government has repeatedly claimed that its defense expenditures are the largest in the EU, that it has the largest defense industry, and that it has contributed to most of the operations and missions of the EU Common Security and Defense Policy (CSDP). However, London apparently exaggerated its input in order to enhance its bargaining position for a new post-Brexit security partnership with the EU, which would include the issues of defense, cybersecurity, and external migration. Britain provided just 2.3 per cent of all CSDP missions. This is considerably less, for example than France, Spain, or Italy’s contributions to civilian and military operations. Moreover, the UK did not contribute to most missions in Africa, apart from the mission at the Horn of Africa, intended to secure the seaways from Europe to Asia. Instead, France assumed the lead in nearly all of these missions. To sum it up, the direct effect of Brexit on EU security operations in Africa will probably be rather small.

A Partnership of Equals or Collective Clientelism?

Some Brexiteers and African politicians alike have expressed their hope for a golden era with a rediscovered but deeper and more partnership-like post-Brexit Commonwealth relationship. London could use the chance to co-operate with the newly created African Continental Free Trade Area , approved by 44 African governments in Kigali in March 2018. African governments envisage using their negotiating advantage as in-demand partners to press for more protection of their domestic markets and infant industries. This strategy might work in areas where British products and services do not compete with African markets. However, it is questionable whether the UK will allow for less rigid tariff-rate quotas and non-tariff barriers to trade, more flexible rules of origin, or greater protection against British service exports, if the British industry could be affected negatively. Moreover, a more liberal attitude on Britain’s part concerning imports from Africa – for example, with regard to quotas and other non-tariff barriers – could increase the cost of future trade agreements between the UK and the EU, especially if London has to leave the EU customs union. Although Britain is proud of its strong bilateral relations with the Commonwealth network, these relations, especially with the most important African players, South Africa, Nigeria, Ghana, and Kenya, have been not without tensions – for example, concerning brain drain from the former British colonies to the UK. Under these conditions, a partnership of equals between the UK and Africa and a win-win situation for both sides is highly unlikely, if not entirely fanciful. Moreover, Brexit will not only challenge European integration but will also put African regional integration efforts at risk.

Brexit is not easy going. Unfortunately, for some of those who voted for it in favor of a truly ‘Global Britain’, or a nostalgia to the ‘golden times’ of colonial British Africa, the reality is unlikely to match their imaginings. On 28 August 2018, Prime Minister Theresa May started her first three-day visit to Africa in order to build up new trade relations with key nations ahead of Brexit. On her tour of South Africa, Nigeria, and Kenya, she presented ambitious plans that would allegedly deliver a major Brexit boost for British firms and investors and promised to turn Britain into a truly global nation doing business around the world in economies with massive and growing potential. Yet, time is running out for the United Kingdom. The story of the ‘betrayal’ of the Commonwealth with the EU-entry of the UK in the 1970s, often used by Brexiteers, is a myth. It is a desperate device used to fool the overwhelmingly disenchanted British poor who voted for Brexit as well as governments of African Commonwealth nations.

Dirk Kohnert’s full paper on which this blogpost is based, Britain and Africa: Heading for the Brexit Rocks is available here.