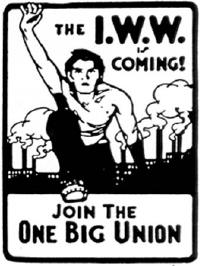 The Other Revolutionaries: the IWW and the fight against racism in the USA, South Africa, India, and New Zealand

A new collection, published by Pluto Press Wobblies of the World: A Global History of the IWW, helps recover the story of an important generation of revolutionaries who battled racial discrimination and repression. The role of communist parties and other Marxists in struggles against racial discrimination and oppression in the United States has been brought to life by classics like Robin D.G. Kelley’s Hammer and Hoe: Alabama Communists during the Great Depression. For South Africa, there also are key works like Allison Drew’s two-volume South Africa’s Radical Tradition, and Peter Alexander’s Workers, War and the Origins of Apartheid: Labour and Politics in South Africa, 1939-1948. The activities of nationalist groups, of course, has been extensively covered.

But the role of a third stream of radical resistance to racism—by anarchists and syndicalists—often has been ignored. More than a century after the founding of the Industrial Workers of the World (IWW, whose members are referred to as Wobblies) in Chicago in 1905, this is starting to change. Wobblies of the World brings together some of the best new scholarship on this remarkable, international movement.

As its name indicates, the IWW aimed to organise worldwide, and, within years of its founding, it had inspired organisations and activists globally. The IWW was international in scope and internationalist in politics, stressing the importance of international workers unity as embodied in its legendary, common sense slogan, ‘An Injury to One is an Injury to All.’ The IWW was a champion of what we now would call ‘globalisation from below.’ It fought for solidarity across borders, for equal rights and equal wages, and for unity across the lines of country, culture, race, gender, skill, and language.

As a revolutionary union movement rooted in Left traditions like anarchism and syndicalism, the IWW rejected the idea that governments could emancipate ordinary working class and poor people—and the idea that workers needed to form a party to take state power. In place of parliaments and parties, it aimed at mass education, democratic organizing, and direct action, to create a participatory, democratic, socialism run from below. Revolution would involve the One Big Union seizing the means of production in a revolutionary, global general strike.

The IWW emerged at a time when many unions excluded foreign and unskilled workers, when many unions favoured job colour bars and segregation. However, the IWW in the United States never established a segregated branch. It actively recruited black, Asian, and Latino workers in the United States. It spoke out against racism and segregation and clashed with organisations like the Ku-Klux-Klan, which it, for example, drove out of Greenville, Maine, in 1924.

In America’s Deep South, the IWW organised amongst black and white lumber workers, including in Louisiana, rejecting segregation. The IWW played an important role on the docks, notably in Philadelphia, and its union work amongst seafarers played a key role in the union’s global diffusion. Some of this story is told in Peter Cole’s Wobblies on the Waterfront: Interracial Unionism in Progressive-Era Philadelphia.

As Kenyon Zimmer notes in his chapter in the book, the IWW had a large base amongst immigrants, including Japanese radicals such as Kotoku Shusui in San Francisco, and the majority of the many IWW publications in the United States was in languages other than English. The union opposed the campaigns for a ban on Asian immigration, recruited East and South Asian workers, and Indian revolutionary Har Dayal (1884-1939) served as secretary of the San Francisco IWW. Dayal is discussed in Tariq Khan’s chapter, which looks at IWW connections with South Asia – especially the influence of the IWW on the radical Indian anti-colonial Ghadr Party. Itself a global movement, Ghadr attempted an armed rebellion in India during the First World War, and the IWW and Ghadr were closely intertwined in a range of ways.

Dave Struthers’s chapter in Wobblies of the World focuses on the union’s activities in the southwestern United States. From Los Angeles and San Francisco, the multi-ethnic, multiracial IWW extended its influence into vast circuits of labour connecting Asia, Europe, the East Coast and Mexico. An IWW brigade from the United States fought in the anarchist-led 1911 Baja California rebellion, and the IWW had a substantial union base in Mexico from the 1910s, organising a general strike on the Tampico oil fields in 1921, as discussed in Kevan Antonio Aguilar’s chapter on Mexico’s most important port. There, as in Canada which is discussed in a chapter by Mark Leier, indigenous peoples belonged to the IWW.

In South Africa, where the IWW emerged around 1910, the union opposed racial segregation, craft unionism, and the racist South African Labour Party: the three main pillars of the dominant white labour movement of the time. Van der Walt’s entry in Wobblies of the World covers the first phase of IWW activity.

In this essay, and numerous other pieces, Van der Walt has also discussed the second phase of IWW influence from 1915 onwards, when the idea of a revolutionary One Big Union influenced the core organisations in the revolutionary left and the early black union movement of the time: the International Socialist League, the Industrial Socialist League, the Industrial Workers of Africa, the Indian Workers Industrial Union and sections of the early South African Native National Congress as well as the Industrial and Commercial Workers Union (ICU) in the 1920s.

The IWW’s role in opposing racism in Australia does not feature as prominently in Wobblies of the World although there are great chapters on Australian Wobblies by Verity Burgmann and Paula de Angelis. However, Mark Derby’s entry provides a striking look at the IWW and the Maori in New Zealand. Here, the IWW tended to work within existing unions, rather than form new IWW ones. Its Industrial Unionist published pieces in the Maori language, praised the communal features of earlier Maori society, and deplored colonial land dispossession. It sought to influence Maori workers, an important factor at the docks, farms and mines.

Given this history, it is not surprising that the IWW was admired by figures as diverse as W.E.B. Du Bois, Claude McKay, and Har Dayal, or that the IWW Preamble was adopted by the ICU in Southern Africa in 1925, under the leadership of Clements Kadalie.

Peter Cole is co-editor of Wobblies of the World: A Global History of the IWW (2017, Pluto), and professor of history at Western Illinois University, USA. Lucien van der Walt is based at Rhodes University, South Africa, and has written widely on anarchism and syndicalism in southern Africa. Cole and van der Walt developed some of the arguments presented here in more detail in 2011 in ‘Crossing the Color Lines, Crossing the Continents: Comparing the Racial Politics of the IWW in South Africa and the United States, 1905–1925,’ Safundi: The Journal of South African and American Studies.