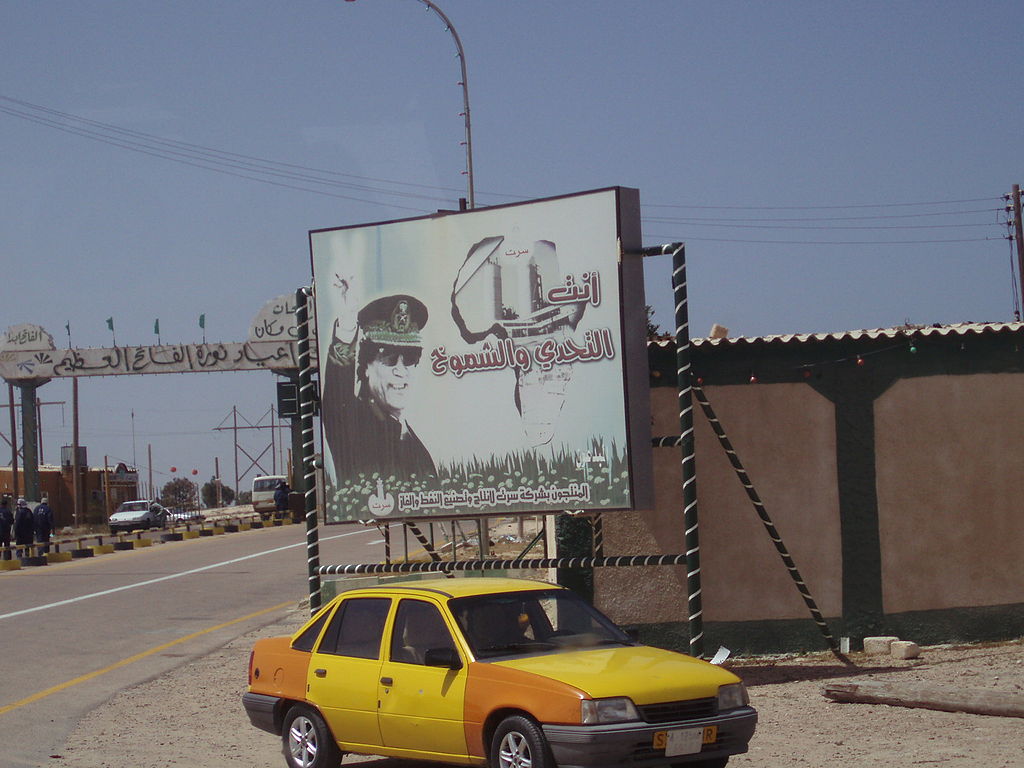 Since the revolt in 2011, Libya has been overwhelmed by chaos, plunging into civil war in the summer of 2014 when Libya Dawn, an alliance of Islamist and Misratan militias, took the capital Tripoli. Meanwhile tribal forces opposed to Libya Dawn have emerged in eastern Libya, grouping around Khalifa Belqasim Haftar’s Libyan National Army, who supports the national parliament in Tobruk.

Last year the UN installed a Government of National Accord in Tripoli, but this government does not have the backing of Haftar, or even the full control of the capital. Militias continue to fight each other in sporadic street battles in the city.

For every side in the conflict, the struggle for oil is central – each attempting to control oil fields with the support of foreign backers and multinationals. In the first part of a two part blog-piece, Gary Littlejohn looks at the issues behind western intervention in Libya in 2011. It is part of a long history of Western involvement, he writes, within and beyond Libya and the MENA region.

In this two part blog-post for roape.net I examine the Western motives for the NATO military intervention in Libya in 2011, arguing that the real objective was not to protect civilians. I argue that its timing and results can be better understood as a means of protecting the predominant international financial institutions, with a secondary opportunistic outcome being a clandestine flow of arms from Libya to Syria.

It is now over five years since the government of Muammar Gaddafi was overthrown by a multinational coalition in which the USA, France and the UK predominated.  In the Western media, this intervention was greeted as a success initially, although the aftermath has been ongoing conflict that has seen renewed military intervention by the US and EU countries including the UK, France, Germany and Italy. This blog-post raises questions about the dominant narrative concerning these events, which claims that the initial goal was to protect civilians in Benghazi, arguing instead that regime change was always the goal, and that the countries intervening have benefitted in various ways from the ongoing chaos.

I intend to examine the stated reasons for the intervention and offer an alternative understanding of its timing and outcome.   In doing so, the focus is on the motives of external actors rather than on the internal social problems, or the political and economic dynamics of Libyan development during the Gaddafi years.  Such an analysis is most definitely necessary, but this does not claim to be it.  While it is true that on various measures the Libyan economy improved during the period prior to 2011, this does not mean that macroeconomic management was faultless; nor does it imply that one should ignore corruption, human rights abuses including torture, or unwarranted interference in the affairs of neighbouring countries.  I hope that this piece might elicit a response that concentrates much more on the importance of internal Libyan dynamics, including where appropriate major policy failures, which rendered Libya vulnerable to foreign intervention despite its evident comparative resilience to UN sanctions.

I argue that it was fairly easy for Western agencies to play on existing grievances, and to run a media campaign to ‘justify’ a military intervention using the spurious doctrine of ‘Responsibility to Protect’ as a cover for the start of a process of regime change.

Whatever his failings, Gaddafi’s time in office was characterised by the investment of oil revenues in vital infrastructure and services for Libya, resulting in  significantly improved health and living standards.  For example, substantial underground aquifers were tapped for the ‘Great Man Made River’ (a huge concrete pipeline network) that brought clean water to cities.  Gaddafi also supported various initiatives that were designed to increase the autonomy of African governments and/or Arab governments. These included the African Union and various liberation movements, including the South African, African National Congress. Such activities constituted an important motive for the demonization of Libya, which was one of the countries that US General Wesley Clark had mentioned in 2007 as being a future target for regime change. He had listed seven countries: Iraq, Syria, Libya, Somalia, Sudan, Iran and Yemen.

The claim that the invasion was prompted by a ‘Responsibility to Protect’ (R2P) citizens in Benghazi who were being threatened by Gaddafi is questionable when one considers the evidence that has recently emerged from Wikileaks and elsewhere, evidence that the Western Mainstream Media (MSM) has basically ignored.

The recent report into the Western intervention in Libya in 2011 published by the UK House of Commons Foreign Affairs Select Committee on 14 September 2016 raises important questions. The report, Libya: Examination of intervention and collapse and the UK’s future policy options, argues that the shift from R2P to regime change was basically initiated by France and that the UK did not manage to persuade other allies to keep to the original terms of the intervention.  The decision to go along with this change of objectives is laid at the door of the then Prime Minister David Cameron, who had decided not to cooperate with this inquiry and who resigned as an MP not long before the report was published. It is worth looking at the report in some detail.

The opening Summary of this report states that the intervention led by the UK and France, and supported by the USA, was to protect civilians from attacks by forces loyal to Muammar Gaddafi, but that this policy was not informed by accurate intelligence.  This is the same narrative that was used for the invasion of Iraq in 2003.  Yet in that case we know from Hans Blix’s public testimony and from Frank Chikane (2013) that prior to the invasion Tony Blair had received two independent detailed briefings – from Hans Blix and from then South African President Thabo Mbeki – indicating that there were no Weapons of Mass Destruction (WMD) in Iraq.  In the case of Libya, the deployment of SAS troops early in the operation, rather than peacekeeping troops who could have been stationed in or near Benghazi in defensive positions, already suggests that the motive was regime change.

The report Summary goes on to say that the drift to the opportunist policy of regime change was not supported by a strategy to shape and support post-Gaddafi Libya. ‘The result was political and economic collapse, inter-militia and inter-tribal warfare, humanitarian and migrant crises, widespread human rights violations, the spread of Gaddafi regime weapons across the region and the growth of ISIL in North Africa.’ It places the blame for the failure to develop a coherent Libya strategy on the then Prime Minister David Cameron. These are scathing conclusions.

The alleged intelligence failures, if true, would be a damning indictment of the work of the joint French/American/British intelligence office in Paris, which had been in place at least five years before. It is notable that there is no reference in the report to internet sources of evidence and analysis, when presumably the committee could have employed a researcher to analyse relevant material. Instead, it took evidence from a fairly limited number of people without any indication of the criteria by which they were chosen.  Only one academic researcher from outside London was called as a witness.

Still the report overall is damning in its assessment as given in its Conclusions and Recommendations. The UK government failed to identify the extremist element in the rebellion. The report rightly points to the lack of formality in decision making in the UK National Security Council, and fairly explicitly sees this as a continuation of the ‘sofa government’ style introduced by Cameron’s predecessor Blair – a style that protects senior politicians from proper accountability because crucial decisions are not properly recorded.  One could see the effect of this from the Chilcot Inquiry into the Iraq invasion of 2003, which failed to find documentary evidence that Blair had been fully informed about the lack of WMD in Iraq.  The Select Committee report specifically draws attention to the Chilcot Inquiry in recommending how the National Security Council should operate in future.

With regard to reconstruction resources, it is only recently that sequestrated overseas funds of the former Libyan government have been partially released, and this will not be fully resolved until there is an effective functioning government. Given that there are two rival administrations at the moment in Libya, this will not happen quickly. I shall argue in the second blog that the UK government’s approach to this issue of securing an effective legitimate government shows an ongoing disconnect between rhetoric and reality. The same seems to be true of the USA.

The failure to secure weapons and establish security on the ground after the overthrow of the Gaddafi government is rightly criticised by the report. The ongoing conflicts in Libya and the growth in migration from Libya to the EU by people from other African and Middle East countries are the obvious direct results of this.  The report supports the arms embargo on Libya, and condemns the dispersal of arms from Libya into other parts of North Africa, but does not ask if that is all that has been taking place – with arms being transferred from Benghazi to Syria via Turkey.  But there are some other issues that should be discussed first.

Some years before 2011 Libya was welcomed back into the ‘international community’, sanctions imposed for the country’s alleged involvement in the Lockerbie bombing were dropped and various countries started to court Libya in the hope of securing lucrative contracts in the newly re-opened economy. Leading these efforts was Tony Blair who went out of his way to personally accept Gaddafi ‘into the international community’.  This is unsurprising because in the interval Libya had built up a sovereign wealth fund worth about US$60 billion and the higher living standards in Libya also offered other market opportunities for foreign governments.  So as part of the competition for contracts in the newly accessible Libya, Gaddafi family members were courted by various Western institutions. In addition, it is alleged that the UK was involved in ‘extraordinary rendition’ to Libya of opponents of the Gaddafi government.

This ‘international acceptance’ probably helps to explain why in March 2011 Gaddafi was so slow to understand that the R2P operation could constitute a threat to his government. Unrest alleged by Gaddafi to have been stirred up by a group of Al Qaeda militants would not have seemed much of a problem for the international community, given that they were vocally opposed to precisely such terrorists.

Yet the real reason for the intervention in 2011, and hence its timing which required a rapid reversal of the ‘rehabilitation’ of Libya, can be seen from the Hillary Clinton emails released in 2016.  As discussed by the well-known author F. William Engdahl on the New Eastern Outlook website in March 2016, the ‘problem’ with Libya was its proposed use of its wealth to establish a ‘Gold Dinar’.   Libya was becoming a threat to the current international financial architecture. This will be the focus of the second part of this blog-post.