Hooks Down! Anti-Apartheid Activism and Solidarity among Maritime Unions in the United States and Australia - ROAPE
20
post-template-default,single,single-post,postid-20,single-format-standard,ajax_fade,page_not_loaded,,qode-child-theme-ver-1.0.0,qode-theme-ver-16.8,qode-theme-bridge,qode_header_in_grid,wpb-js-composer js-comp-ver-5.5.2,vc_responsive

Hooks Down! Anti-Apartheid Activism and Solidarity among Maritime Unions in the United States and Australia

03 Dec Hooks Down! Anti-Apartheid Activism and Solidarity among Maritime Unions in the United States and Australia

By Peter Cole and Peter Limb

In an era of heightened social, industrial and scholarly connectivity, studying the history of transnational labour activism is increasingly relevant and necessary for scholars who study labour and unions, politics, and political economy—be they historians, economists, or others. Examining social movements within and across national boundaries is all the more appropriate given that African nations’ boundaries largely were drawn by European colonizers. As a result, many social and political movements, especially those for independence, engulfed whole regions of the continent. By the same token, the economic forces and effects of modern-day globalization is a subject that, by definition, exceeds the scope of any one nation; hence, it should come as little surprise that there is a renewed sense of working class internationalism, particularly in the maritime sector that is so central to the neoliberal project. Our work covers both political freedom struggles and economic trade, focusing upon transnational labor activism in Africa. Indeed, Africa is an ideal site in this regard as the continent saw independence struggles often transnational in effort and scope, the most obvious being the struggles across southern Africa from the 1960s until 1994, when the last nation on the subcontinent finally was freed of the shackles of colonialism. This short blog summarizes soon to be published work by both authors.

Workers involved in marine transport (on the waterfront and at sea) have a particularly long and deep history of interest in and solidarity with fellow workers across the proverbial seven seas. Refusing to work cargo (be it called strike, boycott, or some other term) in order to express solidarity with people fighting in another land has been one way that dockworkers and seamen have expressed political and class sympathies. What is not always appreciated is the role of dockworkers and seamen in relation to freedom struggles, none more evident than in the fight against apartheid in South Africa.

Our research compares and contrasts the transnational activism of maritime unions in Australia and the United States in what became the longest and most poignant example of global solidarity activism in the post-World War II era—the fight against apartheid. Inside South Africa, the struggle against apartheid lasted many decades—from 1948 to the early 1990s. The horrors of apartheid along with the nobility of the cause and its leaders inspired millions of people around the world to rally in solidarity with South Africans. Many who joined this global anti-apartheid movement (AAM) were workers and their unions. And among the most visible were maritime unions that were well positioned to exert real influence on the South African state, most dramatically by refusing to unload South African cargo.

In Australia, we examine the Waterside Workers’ Federation (WWF) and the Seamen’s Union of Australia (SUA), and related unions. On the US side, we examine the International Longshore and Warehouse Union (ILWU), especially Local 10 in the San Francisco Bay Area, which drove the entire Bay Area AAM and impacted the movement across America. 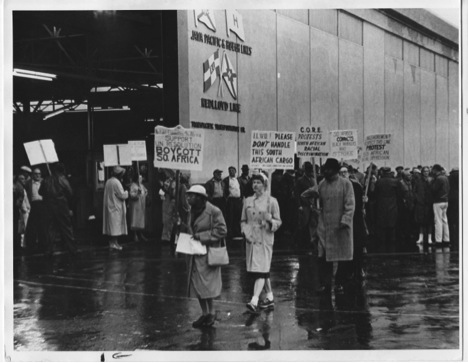 The ILWU and Local 10 were learning about and supporting the AMM going back to the 1950s. However, it was in the aftermath of the Soweto student uprising, in 1976, that some Local 10 members, predominantly Pan-Africanists and leftists, formed a rank-and-file committee to support the AAM as well as struggles in Mozambique and Zimbabwe. Their greatest effort was an 11-day action in 1984 when they refused to unload South African cargo. With the support of thousands from the Bay Area committee who rallied in solidarity, the Bay Area longshore workers galvanized the Bay Area’s commitment to this cause and made the national news. Nelson Mandela himself thanked the ILWU when he visited Oakland in 1990.

WWF and SUA anti-apartheid actions from 1959 to the early 1990s employed the same tactics, vigorously responding from the start to appeals for boycotts by South African unions and the African National Congress, spurred externally by growing international labour and political contacts, internally by the politics of union leaders, the wider AAM, and exiles. South Africa and Australia were trade rivals and ship visits (as in the US) not that numerous, hence the scope for boycott was limited. Yet, shipping remained an Achilles heel of apartheid that maritime unions exploited. In the 1950s, they had made contact with SACTU through international labour and peace networks, and over the next three decades ties with the liberation movement grew. A combination of politicised union leadership and grassroots activism saw numerous boycotts as well as material solidarity. Also underpinning solidarity were connections between unions and the broad AAM. Maritime unions got on with the fight; they took hard action—and, also as in the US—the brunt of reprisals.

These maritime unions operated in different contexts but not entirely so. In order to more fully appreciate and understand the impact of maritime unions’ contributions to the AAM, we uncover and analyze how they acted in more than one nation. We describe the histories of American and Australian maritime unions’ actions in the AAM. Subsequently, we analyze these actions by exploring a variety of themes including: notions of solidarity among marine transport workers (why they are, as a work group, more likely than most to engage in transnational activism); ideological motivations for solidarity activism (notably, union political orientations); ethnic and race relations among workers (demographics, racial politics in unions, and their views on national and global racial politics); and labour connections that these maritime unions made beyond the waterfront (AFL-CIO, ACTU, WFTU, ICFTU). 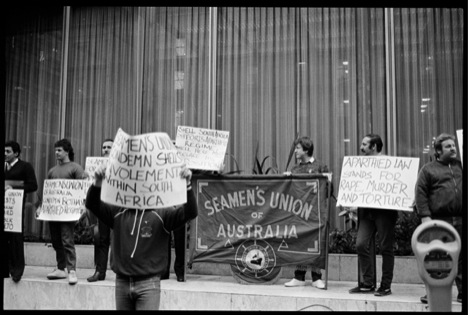 We also engage with analyses of the global AAM and explains why marine transport workers played such a prominent role. We find both similarities and differences in the labour experiences in Australia and the United States. In both countries, the experience of solidarity actions against the Vietnam War and for other causes helped lay a foundation of international activism. And in both, the nature of maritime work and the transnational contacts it engendered sensitised workers to solidarity activism. However these background factors needed to be acted upon to spur action against apartheid. In Australia, strong Communist Party (CP), and later, in the WWF, Australian Labor Party (ALP) officials led maritime unions and, whilst splits sometimes led to rival maritime branches, involvement in anti-apartheid campaigns was consistent across unions, across leaderships and across parties. Here we ask a deeper question about political consciousness in the long history of labour movements in both countries, as well as the role of grassroots pressure. In the USA, a combination of racial (Pan-African) and left politics (including CP, Trotskyist, and syndicalist strands) explain why rank-and-filers in Local 10 (as opposed to the national leadership) spearheaded the Bay Area’s AAM. In both nations, the purposeful action of the AAM and liberation movement representatives helped to link their struggles with maritime unions and popularize boycotts. The long tradition of solidarity actions also encouraged independent campaigns by maritime unions such as material aid for victims of apartheid and other African liberation movements in southern Africa. Our ongoing work seeks to raise the profile of such labour activism for it has often been underrepresented, for instance in the US literature where attention has primarily focused upon religious and student activism. 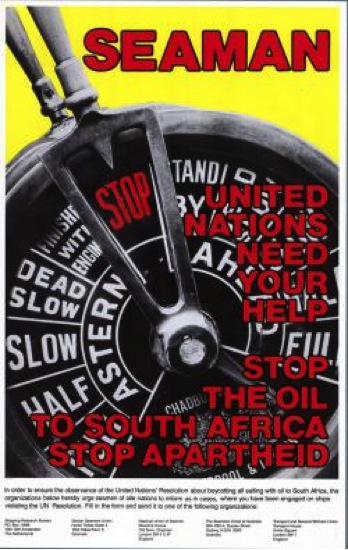